Perth: Up to 3-Night City Break for Two with Breakfast, Wine and Late Check-Out at Nightcap At Belgian Beer Cafe 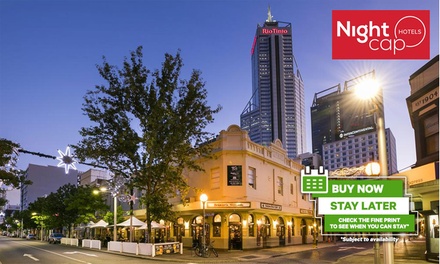 Situated in the heart of the CBD and a short walk from Perth Convention and Exhibition Centre, Nightcap At Belgian Beer Cafe aims to replicate a traditional 1930’s venue style. Thanks to its location guests can have a range of popular area attractions such as Elizabeth Quay, Kings Park and Botanic Garden, Perth Concert Hall and RAC Arena within easy reach. Perth Underground Train Station is only a 200-meter walk from the hotel.

All of the hotel rooms are located on the first floor and are non-smoking.Wi-Fi is available in all guest rooms and common areas. The on-site restaurant and bar offers lunch, light bites and an extensive range of beverages including beer and wine.

As the capital city of Western Australia, Perth’s laid-back culture with big-city attractions has pulled tourists to visit its many beaches, parks and restaurants. Scarborough Beach is a popular hotspot among surfers while Swanbourne Beach allows people to bathe in the nude. Visit Fremantle Prison, a former prison that was built in the 1850s and is now a public museum with tours of the flooded tunnels and aqueducts under the building.

Take in scenic views of various greenery in Kings Park and Botanic Garden – it has approximately 319 species of native plants and 80 bird species. Alternatively, pay a visit to the Swan Bells, a set of 18 bells hanging in a specially built tower that when rung, exert considerable forces on the support structure.