Paris: Double Room for Two with Breakfast and Option on Pizza and Drink at the 4* Mercure Paris Bercy Bibliothèque 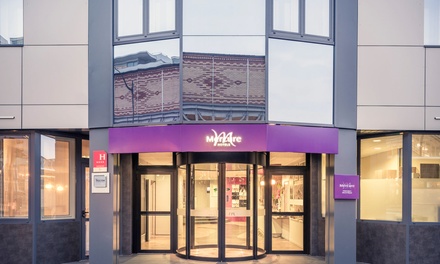 Set close to the River Seine, near Pont de Bercy, the four-star Mercure Paris Bercy Bibliothèque offers a convenient base to discover the French capital. With Quai de La Gare metro station on line 6 right across the street as well as major transport hubs: Paris Austerlitz, Paris Gare de Lyon and Paris Bercy reachable within a short stroll, travellers have easy access to all areas of the city and beyond.

Renovated in 2020, the public areas of the hotel feature a cheeky industrial chic style, while the rooms come with modern amenities such as air conditioning units, en suite bathrooms and flat-screen TVs.

The on-site bar invites for a choice of snacks and beverages, available from early morning until late hours.

Combining a rich heritage with contemporary perks, this lively European capital is a place of historic, artistic and gastronomic treasures including museums, fountains, bridges, vineyards, cafes, restaurants and much more.

The City of Light marries classic artwork that can be discovered at the Louvre or Musée d’Orsay, with contemporary art. Churches are among the oldest intact buildings in Paris, where stained glass windows pair up with flamboyant Gothic structures achieving architectural wonders, such as Sainte-Chapelle or Saint-Denis Basilica. Tourists can have a serene walk on the banks of the River Seine or through the Promenade Plantée park – the first such urban green space arranged on top of an abandoned railway viaduct – while Champs Elysées offers high-end boutiques and glitzy showrooms. Travellers can have a taste of the French cuisine including pastries, sea food and couscous, shop in exclusive boutiques and flea markets, dance the night away in one of the many night clubs, or enjoy a French cancan show at the Moulin Rouge. Paris has a temperate, oceanic climate with warm summers and cold winters. Summer comes with an occasional heat wave and eight hours of sunshine a day, while in autumn temperatures drop to 15°C in October with an average of 50mm of rain per month. During winter, temperatures drop to 1°C in January, with highs of maximum 6°C and approx. two hours of sunshine a day.