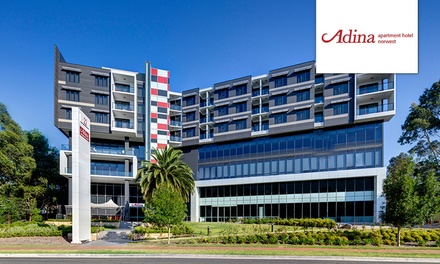 Situated close to Baulkham Hills, within easy reach of Sydney’s CBD, Adina Apartment Hotel Norwest is a modern hotel boasting colourful apartments with up to three bedrooms. Sitting just a short drive from the Castle Hill Country Club, it constitutes a good starting point for exploring the city.

Famous for its glittering beaches, iconic harbour and glamorous shopping and dining precincts, Sydney is a cosmopolitan mix of attractions that has been delighting visitors for decades. The most populous city in Australia, Sydney is known for being cutting edge, down-to-earth and a mecca of diversity where natural and manmade sites abound. Home to the Harbour Bridge, Opera House and golden Bondi Beach, the city buzzes with an infectious energy that enchants travellers both from neighbouring states and further around the globe.

Embark on a self-guided tour of the city, weaving up to Circular Quay to see the iconic Sydney Harbour Bridge and the Opera House. Then stroll over to The Rocks to learn about the city’s history, where cobbled streets, Aussie pubs and weekend markets present a cultural experience. Back at the Quay hop on a ferry bound for Balmain or Manly, appreciating the water views and snapping photos of waterside properties and the CBD skyline.

Hit up suburbs like Paddington and Surry Hills for trendy boutiques, hip bars and creative restaurants or jump on a ferry to Taronga Zoo, Balmain or Mosman. In the city, spread time between museums, galleries and waterside locations like Darling Harbour and Circular Quay. Wrap up the day with high tea in a swish hotel or authentic meal in Chinatown.