Amsterdam: Deluxe or Superior Room for Two with Option for Breakfast at The 4* Manor Amsterdam 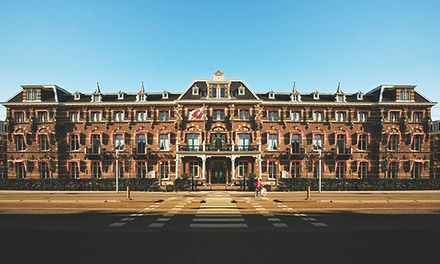 Boasting four-star amenities, The Manor Amsterdam is a stately building in the eastern part of the capital. The monumental exterior facade makes a swift change into the styled Italian interiors which greet the visitors. The tram stop is practically in front of the door, so within just a few minutes, guests can reach the historic center or the famous museums on Museumplein. The Oosterpark and Artis are also within walking distance.

The rooms of The Manor are bright and spacious and are characterized by the contemporary interiors and art that hints at iconic Amsterdam’s gems. Each one features also a flat-screen TV, complimentary Wi-Fi and coffee- and tea-making facilities. The private en-suite bathrooms contain shower facilities. In the deluxe rooms, guests can also enjoy baths and relaxing views over the garden.

Foodies can also enjoy snacks and drinks at any time of the day in the lounge bar which serves breakfast in the morning or cocktails in the evenings.

Sitting on the south bank of IJ Lake, Amsterdam is a port city connected to the North Sea, with the Amstel River flowing through from south to north. Mixing vibrant nightlife and many diverse festivals with Renaissance architecture and cultural events, Amsterdam is a convenient spot for exploration and relaxation.

Guests can take a breath of fresh air with a stroll through Erasmus Park, where ponds, gardens and local attractions make for a nice day of adventure or lazing in the sunshine. Moving inside, travellers can visit the Van Gogh Museum, which exhibits the works of the great master alongside pieces painted by his contemporaries. In this city of many tastes, tourists may enjoy Asian or Indonesian cuisine at one of the city’s restaurants or have dessert in one of the famous pancake houses, before renting a bicycle for a refreshing ride along the canals. Amsterdam also boasts shopping streets, filled with a wide range of stores and street markets selling food and clothes.

The weather in the capital city of the Netherlands features an oceanic climate, strongly influenced by the North Sea. The temperatures during the summer season are mild, with an average high of about 20°C. The city gets a great level of sunshine throughout the season. However, the average low temperature, especially in the evenings, reaches about 12°C. Starting from mid-September, autumn is a rainy and wet period, with October having an average of 13°C and November one of 9°C. Amsterdam rarely sees the temperatures drop below 0°C in winter, with an average high around of 5°C. The level of sunshine drops to one hour per day in December, but this improves as the season progresses. In the spring, the weather starts to heat up. Although March and April are still chilly, May is often very pleasant with highs reaching 20°C.

GET THIS DEAL
← Prev: Amsterdam: Small or Standard Double/Twin Room for Two with Option for Breakfast at The Lancaster Hotel Amsterdam Next: Headlight Adjustment (€12), Diagnostic Check (€25), Wheel Alignment (€35) or Tachograph Calibration (€119) →